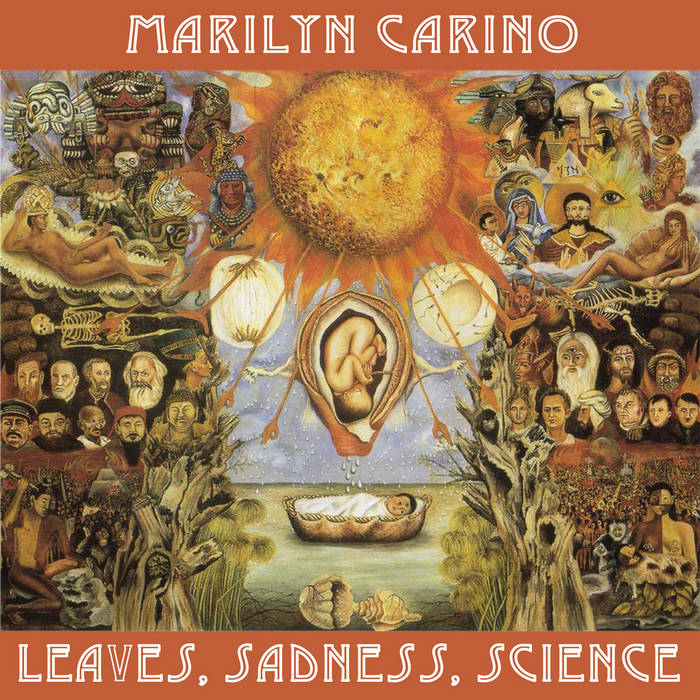 "Lurking and hypnotic...Leaves, Sadness, Science, is a rabbit hole that leads into a burrow of wonderfully warped vibrations and serene cries."
- QUIET LUNCH

When R.E.M. bassist Mike Mills (who co-wrote, performs and sings on Leaves, Sadness, Science's LP-only bonus track, "War and Peace") first heard the entirety of Marilyn Carino's second solo album, he raised the question that has made Carino (and scores of music promoters) wince since she began fronting the band Mudville in 2003, "What the hell do you call this music?" They came up with categorically-challenged terms like "torchy", "existential" and "womb-tronic”, which they agreed still wasn't quite it but would do.

Carino’s singing has been called, “powerful to the point of bringing you to tears” (Straight No Chaser) and “smoldering” (The New Yorker); her music, “enchanting - a testament to the healing powers of rhythm” (Nylon); her music about, “troubled longings and bleak, surreal visions” (New York Times); her lyrics, “poetic, filled with imagery” (New York Post). Carino’s songs have been featured on prominent TV shows and films, including the FX hit Regenesis and the 2015 feature, Someone Else.

Informed by the voices of Nina Simone, Thom Yorke and Lightnin’ Hopkins, favorite singers she deems "stirring, bravely strange", Carino's second solo album after 2011's critically-lauded Little Genius (which All Music Guide's four-star review deemed, “an artful set of brave, assured electronic soul tunes, expressed with a voice that is free of artifice in its expressions of longing, struggle, empathy and desire”), imagines soul-mated collabs where those singers hang in stoned basement recording studios with Prince, Suicide and Boards of Canada.

Written, recorded, mixed and performed solely by Carino (except the aforementioned track with Mills), Leaves, Sadness, Science is a collection of vocally- and word-driven soundscapes; head-space grooves formed from layered, Moog-y synths and stark beats. The songs evoke gripping internal monologues about "hope and body fluids"; songs that are punkily romantic despite their overt skepticism of romance.

The album’s title comes from a Frida Kahlo installation Carino saw, which featured monochrome rooms, for each of which a sign noted Kahlo’s feeling about the various colors. Yellow was madness, blue was peace, and green; leaves, sadness, science. The ten tracks on the album echo the graphic, challenging and charged paintings of Kahlo, who’s work, “Moses (Nucleus of Creation)” graces the album's cover.

Marilyn Carino gained notoriety as the singing and songwriting half of Mudville. Her contributions to Mudville's three albums were lauded as "Nina Simone coming back from the dead to front Morcheeba", her unique, moving voice hailed as "fearless", "enchanting" and "otherworldly". She has written, recorded and/or performed with members of R.E.M, David Byrne, and legendary producers Sly and Robbie. ... more

Bandcamp Daily  your guide to the world of Bandcamp